The Sleeping Warrior sounds like a deceased Native Indian Chief from centuries past, who would know it is the local name given to one of the mountain ranges that can be seen from the Isle of Bute in the Highlands of Scotland.

My good friends Brian and Janet Hill, farm beef cattle and sheep on what has to be one of the most picturesque farmlands I have ever seen, right at the most southernly point of the Isle of Bute.

However beautiful a place may be, it usually means that it will also be remote and it will have challenges that we on the mainland neither face nor understand. The added costs of farming on such an Idyllic Island are vast, for example, in bad times transportation by ferry and road to an abattoir can outweigh any profit made from rearing such animals, in particular as you may have bought and brought winter cattle feed from the mainland in order to feed your animals in the first instance. 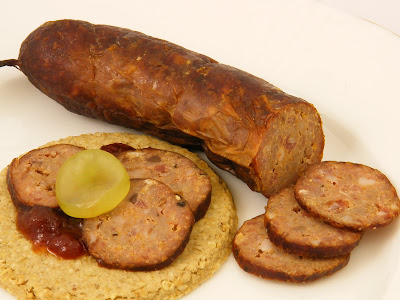 Diversification on Islands such as Bute, can often mean the difference between survival and failure. I had the good fortune last year to travel to the Scottish Highlands and whilst there I met Brian who attended one of my charcuterie courses. Brian grasped imediately the concept and went away and very quickly adapted a Merguez sausage recipe to create his own version, a local hot-smoked sausage with some kick and happily named it after the mountain range he views from his farm "The Sleeping Warrior".

So good is this sausage, actor Alex Norton from the television series "Taggart" fame, visited Plan Farm to see for himself how and where this sausage is produced. Alex's visit was covered by "The Hour" programme and was aired on Scottish Television. 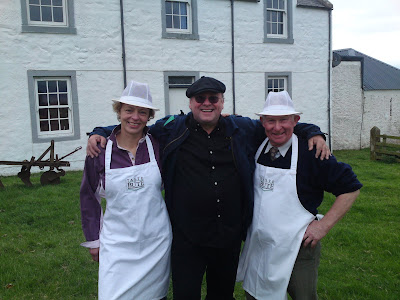 I do hope you will visit their website www.tasteofbute.co.uk and see for yourself what both Brian and Janet are doing in order to diversify and survive in farming. They need your help, so please order your sample of the magnificent "Sleeping Warrior" today.

http://www.tasteofbute.co.uk/
Posted by Marc Frederic at 09:14