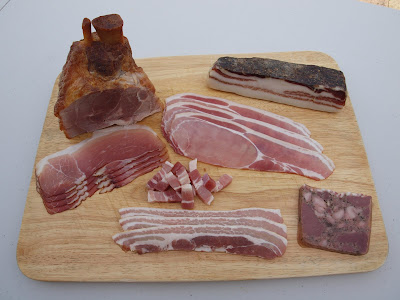 Did you know? Regardless of where on the pig, if you apply salt to the pork it is then known as ham, bacon or gammon. Confusing right? Myself I try to simplify the terminology by applying this method, follow me and see if you agree.
Imagine a pig laid out in front of you, cut off it's head, now cut away the shoulder & hand after the fifth rib, cut away the pig middle from the leg. We now have 4 pieces of pork, with me so far?
If I was to salt the head, I would then refer to it as a cured pigs head.
The shoulder & hand I would probally seperate into two pieces and if I salted these I would refer to them as collared bacon for the shoulder and a cured hand of pork.
The pig middle as a whole piece salted, I would refer to as whole or middle bacon, if I were to seperate the belly pork from the loin and salt these individually, then I would refer to them as streaky bacon (belly) and shortback bacon (loin).
The leg of pork can be called a ham, but I prefer to call it a leg of pork, when salted it is then I refer to it as a ham. If I were to break it down into smaller joints, I would refer to them being gammon joints or smaller still as gammon steaks.
Do you agree with me in this explanation?
Posted by Marc Frederic at 14:20