You will be wondering what is Part 2 all about having read some months ago the blog I wrote on a new salami culture, well lets remind ourselves about that initial simple blog first;- http://charcutieranglais.blogspot.com/2011/05/salami-culture.html 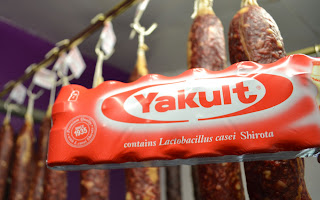 Well since that blog was written I can tell you there has been some lively activity going on, so much activity in fact it caused the company Yakult to trace the source. What activity you may well be asking right? Well it was you guys, yes you guys who follow and read this blog who caused the ker fuffle. After the blog went out, most of you readers and in particular the salami enthusiasts amongst you went out and bought yourselves some Yakult product to add to salami making. Of coarse there was also some massive traffic to the Yakult website www.yakult.co.uk for those looking for further information on the product. 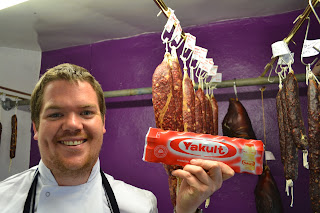 Chef Paul Websdale with his Yakult Salami (what a cheesy smile!).

The I.T. department within Yakult eventually traced the source to all this activity to my blog. The company having discussed their findings contacted me and shared their gratitude by inviting myself and my wife to an up and coming birthday celebration they were having. 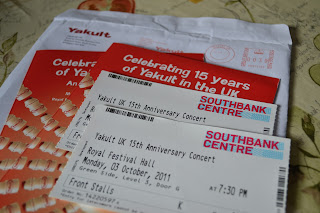 This invite was no other than a grand bash (concert) at the Royal Festival Hall in London. This concert evening was to be presented by OJ Borg TV & Radio presenter, including the Royal Philharmonic Concert Orchestra conducted by Phillip Ellis and also starring in the concert was classical soprano singer Lesley Garrett CBE. (by eck that lass can sing!) 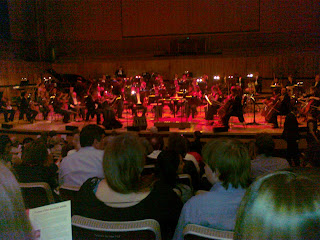 Amongst the guests were Japanese Ambassadors, RAF Top Brass and other titled VIP's whose names I can no longer remember. The hall was full to bursting and the many thousand seats were filled with people in their best attire. When the first act got under way it consisted of the classicals from Mozart - Strauss - Tchaikovsky to name a few; and when Lesley Garrett sung Bizet - Carmen Suite No.2: Habanera, she was pointing straight at me when those words "I love you" were sung....

I adored the number Dvorak - Rusalka: Song To The Moon

Lesley changed her frocks several times during the concert, starting with one red number and then to a white sparkly sexy outfit before changing once more into another red floral dress for the second act (the white dress was my favourite). It was Lesley who made those frocks look grand and elaborate and not the dresses flowering our star turn, I think you get by now I fell in love with her on this wonderful evening. I suppose I better go and buy her CD now!

Let's not forget the orchestra, they were faultless throughout the evening, whilst at times including the audience to participate through clapping, this was evolving to be one of the best evenings of my life. I tried counting the violinists several times during the evening and I think I got to 30, then there were all the other musicians possibly 60 or more in total. 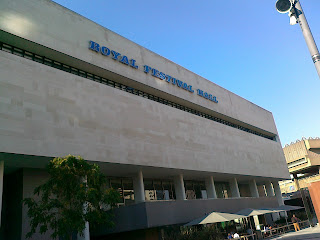 I'm pinching myself as to the reason of why I'm here, charcuterie has brought me to a place where normally the association does not exist, not until now that is. This leaves not only to say to Yakult, Thank you! But also to Mike the Farmer from Tavistock who brought the idea to class and you my blog readers for making it happen. Merci B Q.
Posted by Marc Frederic at 19:43