Recently I was approached by New York publishers WW Norton & Company asking would I be interested in reviewing a revised & updated version of Charcuterie by authors Michael Ruhlman and Brian Polcyn. Of coarse I was delighted and bursting inside with pride that I had been asked, you see I've had these two men on my wish list of who I would most like to meet and work with for some years now and this request felt like I was a step nearer to that goal. 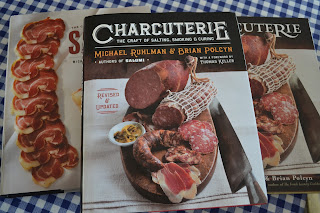 Having read the revised copy that was sent to me recently, my gut re-action was to respond to the publisher and jokingly say " I think it's the 2nd best book on the subject of charcuterie in the marketplace" however these guy's havn't yet met me so I'll withold using my sense of humour and give a sensible and worthy response.

For several years now whilst travelling mainland Europe including France and sometimes beyond to teach charcuterie, I'm often faced with Michael & Brian's book in the classroom, this set's a standard for my teachings for I know the students having read and studied the book their knowledge bar will have been set very high indeed.  Their books I already include as tools and points of reference in the many classrooms and cookery schools I teach at throughout the United Kingdom including supplying the information where to buy them, such is the importance that I attach to the content.

I can't finish this blog without a quick reference to their book "Salumi" as I feel it is their strongest work so far. The book has a calmness about it, as if the men themselves are now comfortable with their subject and this portrays right throughout their book. Imagine being in good company and eating alfresco with some de-canted red wine along with some freshly baked bread, cheese and salumi, yes you can?, well that's how their book reads and feels whilst thumbing the pages....

The men say themselves their knowledge has deepened since first writing their book Charcuterie as it does with all of us whilst on our culinary journeys, however they have been wise enough to revise and update their original book in order that we can benefit from that learning.

This is a book that will go down in the time of history as being one of the most important references to the craft of salting, smoking & curing...