Well Christmas as certainly come early for myself this year 2013, for it is mid Novemeber and whilst I was enjoying a Full English breakfast it was quite apt that my postman arrived clutching a brown parcel with a book inside explaining how to make those all important breakfast ingredients like; sausage, bacon, ham and much more. 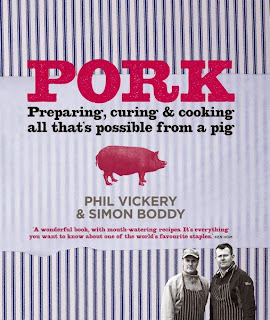 That newly published book titled PORK is authored by my good friend Phil Vickery along with his friend Simon Boddy. Not many of us will know that Phil has a huge appetite for all things farming, we just see him on telly doing his other passion, yes cooking. But I can tell you he has a thirst for farming knowledge and for all that it encompasses especially in the production of food and how best we do this. I remember some farmer friends of mine on the Isle of Bute in Scotland ringing me after Phil had visited them, he was there to film about their smoked meat produce and albeit he expressed his interest in the produce, my friends said very happily, Phil just wanted to quiz them both on how they farm their land in such a unique landscape and how the cattle and sheep cope with the extreme weather etc etc. To converse with Phil on such a topic pleased my farmer friends more than having the film crew there to cover their story on smoked food.

So it was of no surprise at all that to read this book and find stories that relate to the rearing of livestock in particular the pig given Phil's interest. I don't know Simon his butchery friend, we have never met, however I feel I've been in his company many times having read his tales on butchery and pig rearing. I would relish the chance to meet him and have a colourful debate over his comments on page 14 over whether traditional breeds offer the best in flavour (of coarse they do) whilst we are downing an ale or two of coarse. If we could include Peter Gott too in the room, then it would be definately a night to remember for sure...

Anyway back to this book, it's been a while since such an honest inclusion of recipes that salute the pig has been put together, of coarse this is Phil's domain and he is considered one of the top chefs in the country who knows best on how to use British produce. He also very cleverly finds the balance by including some recipes from his travels with inspiration from the Americas, Asia and Europe thus tempting us to try them. However by partnering with his butchery friend Simon they have also included an element of charcuterie recipes where families can get together, timely given now that they are returning to tasking themselves in carrying out forms of basic sausage making and the curing of homemade bacon and hams. The charcuterie recipes included by Simon are similar to my own, so I know the reader is in for a real treat when they come to eat their first homemade bacon butty.

An odd thing to say perhaps, however I'll say it anyway, "I trust this book so much" I'm going to include it in my charcuterie classes for my fellow students to browse with an added inclusion in my course handouts as to where they can purchase a copy.


http://www.kylebooks.com
Posted by Marc Frederic at 10:52