The Gentle Art of Preserving by Katie & Giancarlo Caldesi

Earlier this year I predicted that preserving would be the in thing in the foodie world, this topic is not new as we know, but I think it is right on trend at the moment as we have seen much of it now being screened on our televisions in the form of jam making amongst baking programmes, chutneys being covered by daytime chat shows and gravlax on other evening food programmes etc. 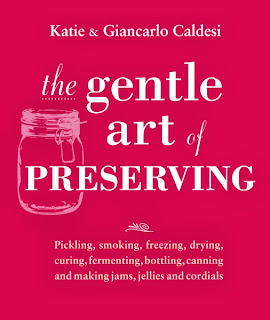 There are many books on this subject in circulation but none written down in the way that Katie and Giancarlo have approached the subject. As the title suggests "the gentle art of PRESERVING" this book is laid down so that the whole family can get involved and easily attempt and succeed in preserving their favourite foods whether that may be fruits, vegetables or maybe fish and meats.

I myself have spent time with the family Caldesi at their home and at their restaurant in Bray, I witnessed first hand their grit and determination in ensuring all that they were to pass on was fully tested by themselves, their family, their friends, their colleagues at the restaurant, even their customers and not to mention all those who happened to drop by their home (OK, I was referring to myself).

Katie took me in the garden and showed me the Wendy House that she had proudly converted into a smokehouse (not sure why they had a Wendy house in the garden when their children consist of two boys). The pictures of the Wendy house in the book may look like an house fire at first, but it demonstrates that you can adapt what ever you may already have at home without having to spend money unnecessary.

I've been preserving food for many years and yet whilst sampling the wares in the Caldesi kitchen that they had produced in their research for their book, I found myself learning a lot more about preserving than I already knew (I must remember to blag a copy of their book, if only to access that Sloe Gin recipe). One of the recipes they include is the brining of chicken, oh what a revelation this is if you have never done this before. The process does many things to the chicken, but the best one of all is it allows the most novice cook to fully roast the bird without it ever becoming too dry, it remains moist and flavourful and allows the cook to be applauded for having such skill.

The day I popped into the Caldesi home kitchen luckily was a day when Giancarlo was just about to start butchering a pig, this being my territory, I was intrigued at how he would tackle the job. It was fascinating watching him butcher the pig for both British and Italian cuts and sometimes he would do this single handidly as his mobile phone was too often in his other hand taking calls from the media etc. 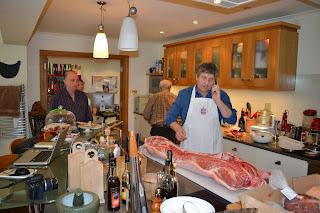 But not to be outdone Katie was busy making up brines and preparing salt crocks to house the cuts I later saw like Guanciale, Lardo and Coppa all of which she cured whilst getting ready the off cuts to produce various salami.

The Caldesi's have previously written many books and this new book is as well written as their earlier books, they surprised me constantly by travelling to all corners of Europe to double check that their researched recipes were accurate and that the preserving techniques were as they should be.

If there was ever a book to buy this coming Christmas, then surely it has to be this one....