No, we won't be reviewing a Vietnam war film from the 70's, this Apocolypse Now is the name of the seasoning for the alledged Hottest sausage in the World. 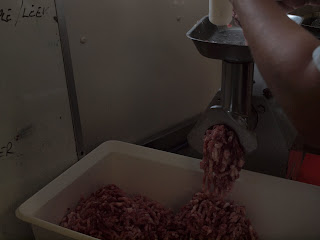 Franco of http://www.sausagemaking.org/ sent me this seasoning to try and to give him some feedback. 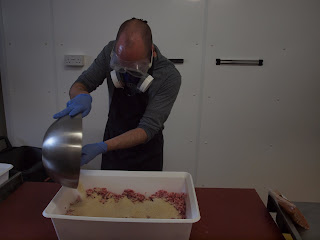 Sadly the seasonings name is also the name of a very hot currywurst in Germany as I found with some research on the internet, this will cause some confusion for sure.

Anyway back to the seasoning, when it arrived I read the instructions supplied, they advised it should not be used by people with health problems, nor should it be used by minors or the infirm. Those that do use it are advised to use (PPE) Personal Protection Equipment, this was to include goggles, face mask and gloves. 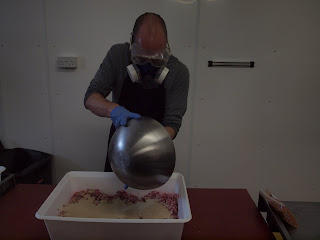 As I have a health problem myself, I decided to wait until my next Masterclass in speciality sausage making at http://www.empirefarm.co.uk/ , here I would ask for a volunteer to take on the task of making this alledged hottest sausage in the world. Our volunteer is Tom, well done Tom for picking up the gauntlet! 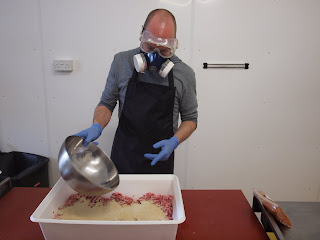 Tom followed the instructions and advice supplied by Franco to the letter, I have to say here this is the first time in my charcuterie career that I have ever seen anyone dressed in this particular attire for sausage making. 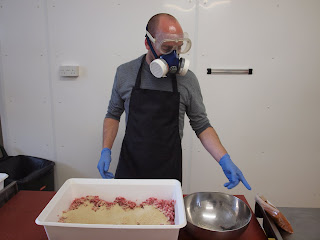 While Tom was putting this sausage mix together, I was asking myself who on earth would want a sausage so hot that such precautions were required to put it together, and what would the eating be like, who could possibly enjoy such an inferno of the like and reputation that this sausage has.

I'm also asking myself as the tutor for this masterclass, can I get away without sampling the finished product, I'm quickly beginning to realise that is not an option, oh dear all of a sudden I'm feeling all queer! 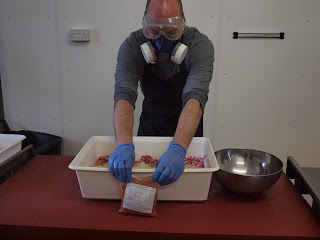 Zoom in to the above picture to read the info on the packet. 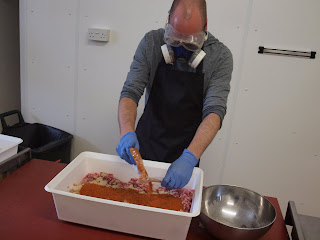 The ingredients of this seasoning include: salt, sugar, chili powder and the formidable Naga Jolakia chili powder. 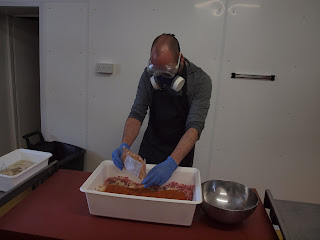 I can tell you here that the sausage were made and sampled including myself reluctantly trying them, it was at this point we were all suffering from the effects including leaving the butchery to seek out some milk to dampen the pain, yes pain, it was monsterous. Beads of sweat appeared instantly on my forehead, my tongue felt swollen and like it had been dragged along the floor of a budgie cage where it was rasping like sandpaper on rough cut wood. I could no longer focus my attention on taking photographs, so this blog will finish without any further pictures I'm afraid.

Philip Wray who was also in class suggested it had no place in the market other than perhaps to be used as a (Dare) on a pub menu, I have to confess I agree with Philip. This sausage probally is the Hottest Sausage in the World as Franco explains, but who wants such a thing? I have a huge sense of humour as most of you know, however I can't see myself ever making this again.


I know Franco has been secretly laughing at the thought of me and the students taking on this task, which leads me to say loudly "Franco, I'll get my own back, you wait and see!"

We did have a bloody good laugh though.

P.S. Digressing I know but did I mention I no longer have a problem with my neighbours cat toileting in my garden ?
Posted by Marc Frederic at 18:04