Yes guys, fat is really back and not before time if you ask me. It has been away for far too long! People were begining to think that goose fat was just for Christmas in order to get your roast potatos gold and crispy. 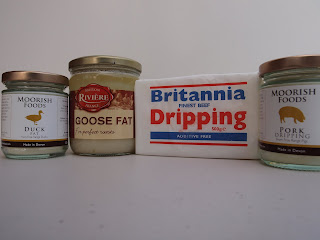 Where has it been? Well I can tell you for some years now we have learnt that travelling abroad for our holidays was also a voyage of culinary discoveries. We had discovered olive oil, yes olive oil has to be the largest reason as to why fat fell from our table. I'm not saying we should stop using olive oil for it too has a place in our larder. This era of discovery also timed with reports of alledged health implications if we continued to eat fat in the way we did, we now know that to be so different. 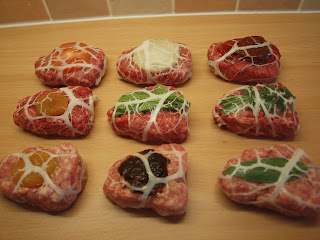 I'm not going to banter on about the health issues over whether we should eat fatty foods or not, that's for you personally to decide. I know I like it and I wouldn't be without it, after all I couldn't do my job without it. In my work I use it in many forms, here I've used Caul Fat to make Crepinettes, but it also can be used to wrap and hold together faggots, terrines of meat loaves like Haslet. 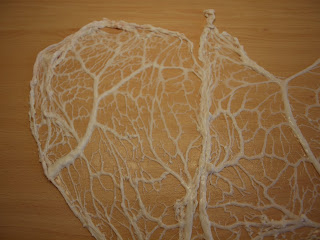 Even our butter has been at risk as all those alledged healthy options of margarine and spreadable oils came into our lives. This also had an effect on our baking industry as more and more artisan bakers closed due to the competition of supermarkets with their mainly bland confectionary. I'm not saying you ought to make your own butter as I often do, but please think about the British dairy farmer as you choose your fat source for your baking. He needs you! 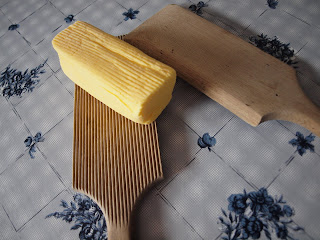 Flare fat / Leaf fat whatever you call it in your region is the finest lard you can obtain. 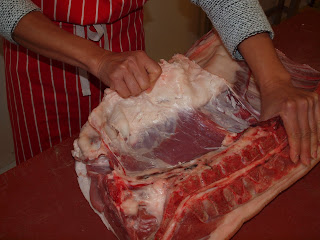 Pull away from the pig's stomach the set flare fat and roll it up into a tube shape. 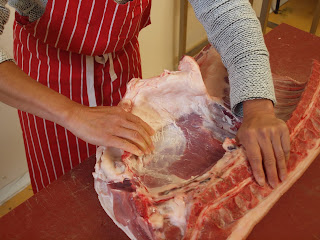 Then cut across the length before placing the segments into a slow cooker to render down into pure lard. The old terminoligy for the cooked remnants is Skretchings not to be confused with scratchings. 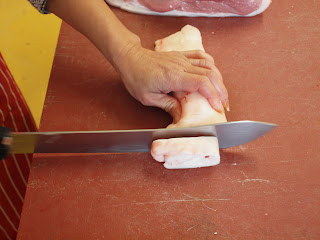 Centuries ago before sweets were invented the skretchings were given to the children as treats, now they are are used as dog treats. 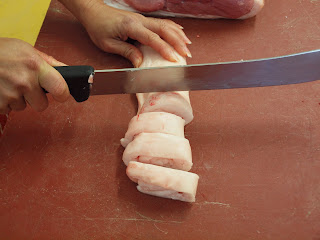 Cod Fat is the fat you see tied over the boned & rolled beef joints in your butchers window. This fat helps baste the meat during cooking and by adding flavour and moisture to your lean meat. 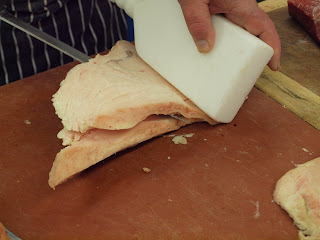 Here the fat is being sliced from the cod piece and before it it is battered flat with the fat basher. For those of you who don't know, cod fat is taken from the scrotum / crotch area of beef cattle, and hence probally why cod piece was so named.

We need fat for many reasons, I'll name a few here to get you started and then you think of a few: Candles, Soap, Christmas Pudding, Waxing Ski's, Waterproofing Clothes, cooking Yorkshire Pudding, Suet Pastry, Larding & Barding, Confit and the best Fish & Chips are fried in dripping !

One last thing about fat I'd like to ask of you, if you are not the kind of person who likes to eat fat, then can I ask that you still buy fatty meats, cook with it and only when it reaches your plate cut off and leave what you wish not to eat? Buying fatty meat usually means that the animal has had a longer and sometimes better life in order to reach a level where it has a good covering of fat. You see, you can make a difference!