What is Colonial Goose I hear you say? Well I can tell you it's been around for many years, in fact it goes back to the colonial days when the early British pioneers were some of the first white settlers to reach New Zealand. On the menu was mutton mutton mutton and the few eateries that were around then decided to re-vamp their menus and entice their customers with a new dish called Colonial Goose. This new dish was actually mutton dressed as a goose as it was easy to bone a leg or shoulder of mutton and then tie it to resemble the geese that the pioneers were missing from back home. 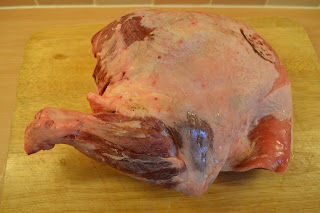 You can use either a leg of mutton or a shoulder of hogget as I've used here. Start by removing the shoulder blade along with the humerus bone from the inside of the shoulder. Once the bones are removed, fill the cavity with a stuffing, traditionally honey and chopped apricots were included as they were plentiful, once stuffed tie the joint to secure the stuffing and also to help keep the shape of the goose, pinning the knuckle bone with a skewer will give it an upright swimming appearance. 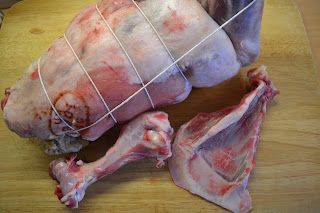 In order to get a silky brown colour to the joint, it would be marinaded in red wine thus taking on the rich colour of a real goose. Personally I would cure my joint in salt for at least 3 weeks before butchering and stuffing as this imitates the goose better than just using a wine marinade. 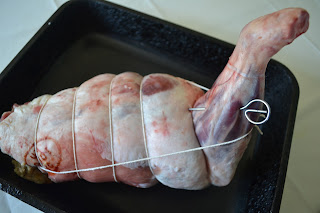 I prefer Colonial Goose cold and sliced thinly served with chutney and bread, but you can eat it warm with vegetables and lashings of gravy if you wish. Which ever way you choose to eat this dish I'm sure you will enjoy it and it will be a talking point amongst your family and friends.

Tip: For the professional butcher / chef; I cured this joint sous vide for 3 weeks using between 30g-40g of curing salt per kilo of meat. Afterwards I take out the joint pat dry with paper towel and then re-pack in sous vide along with a few herbs a little lemon zest and cook at 71c degrees for 3hrs and then leave in the bain marie until chilled.

Try it and let me know what you think guys...