Chicken butchery is not difficult, we should all be able to dissemble a bird ready for cooking in portions, but how many of us can actually do it?

Regardless of the answer, I hope to demonstrate here how to butcher an economy chicken through both the pictures and my step-by-step guide in words. Also I will offer a few suggestions as to what to do with the different cuts.

Now the first step with your chicken is check to see if they are any giblets inside your bird, if they are, then remove and place to one side to use later. 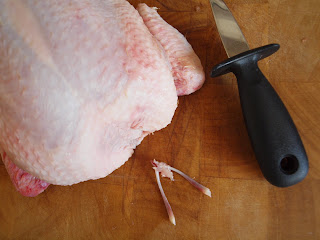 Remove the wishbone next, I use an oyster shucker, for it is short and blunt, but yet easy to handle and makes removing the wishbone safe. Just use it like you would a knife and once you have cut around the wishbone, you can easily lift it out by placing the shucker behind the bone and placing your thumb in front and then by pulling. The reason for removing the wishbone is that you can remove the breasts without leaving any meat behind, also if cooked as a whole bird it allows you to carve more efficiently. 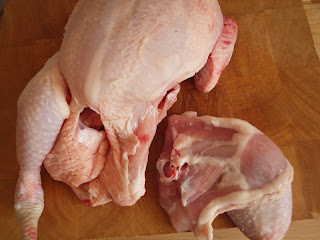 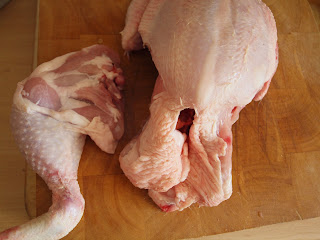 I like to take the legs and thighs of next, I cut in between the thigh and the body of the bird and then using my hands I fold back the legs until the hip bone pops out of it’s socket. Here I take my knife and cut right through the flesh and skin passing through where the two bones would have joined. 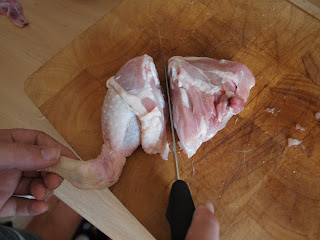 Separating the thighs from the drumstick is done easily by placing the leg & thigh skin side down, then following the line of fat that runs right across the knee joint, cut straight through with your knife. My favourite bbq chicken meal is drumsticks that have been filled with cheese and wrapped in bacon. I firstly create a cut across the fleshy muscle, then I pack the wound with creamy cheese and finally I bandage the drumstick with streaky bacon. This combination is fantastic cooked on the grill and when you bite through all three flavours, oh boy are you in for a treat! 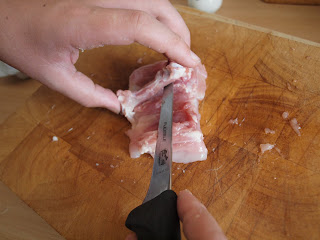 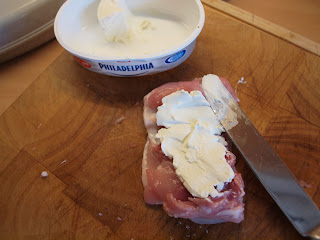 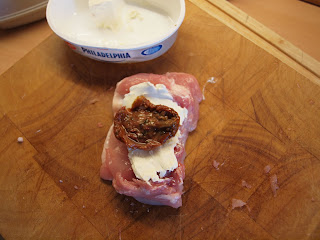 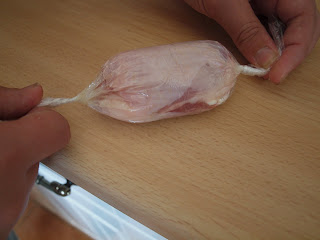 The thighs are easy to de-bone, so I do exactly that and then I spread some soft cheese on to the chicken and place some sun dried tomatoes in the centre. Finally I roll up the meat in to a nice “galantine de poulet” by using cling film, then poach for 12 - 15 minutes before unwrapping the cling film to brown in a skillet to finish. 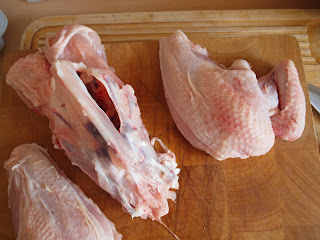 Now to the breasts, following either side of the breastbone cut off each breast, place the carcass to one side for later use. 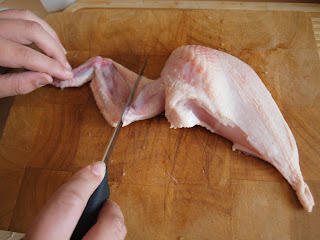 To further enhance the chicken supreme, place the back edge of your knife in the armpit of the breast and where the blade touches the wing section, cut all around this wing section and scrape off any flesh and skin leaving a clean area of bone. Wrap silver foil around this bone section to avoid burning during cooking, the remaining meat nearest to the armpit will contract during cooking and will sit nice and proud when your breast has been cooked, no wonder they call it “chicken supreme” it looks delightful. 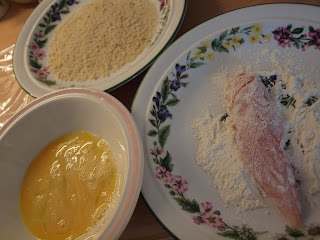 Before you prepare your chicken supreme, you first need to tease the tenderloin away from the breast meat by inserting your thumb and fingers behind this tender piece of meat and gently separate it from the breast. By doing this you have made the remaining breast more even in thickness for better cooking and as a bonus you get to make goujons from the tenderloins. Here you slice the loins in two at an angle or keep whole, then you coat your tenderloins in season flour, then in egg and finally in seasoned breadcrumbs, before deep fat frying until they are golden. The kids love these! 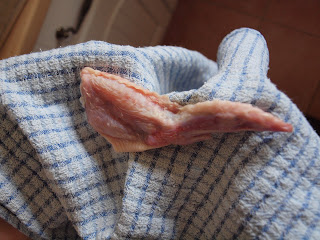 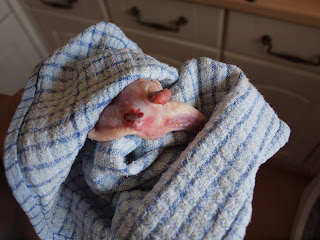 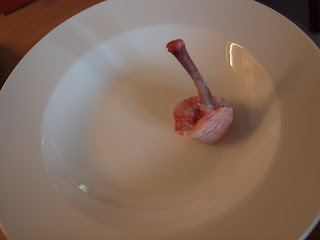 Back to the wing tips now, here I like to make “chicken dollies”. Take a tea towel and hold the wing tip in both hands with the inside of the wing facing upwards. Now snap the joint and at the same time push the two main bones from the middle part of the wing through the skin, just like a compound fracture! Wiggle and pull out the smallest bone, then cut off the wing tip itself and put aside with the carcass for stock or soup along with all the other bits. Back to the dollies, again and still using the tea towel, hold the remaining bone and with your other hand, hold the meat and pull it down the length of the bone, this should turn the skin inside out leaving a nice round ball of meat which can be glazed and then grilled, these are what I call “chicken dollies”.

This chicken as I said earlier was an economy chicken, weighing approximately 2.2kg and costing £6.70, normally I would use free-range chicken and very occasionally I would use organic. I looked at the price of buying all the chicken parts separately and I can tell you they would of cost £12.08 so a total saving of £5.38, not bad for 10 minutes work with a knife.

The thing is, you know you can save money whether you buy economy, free range or organic chicken just by portioning your own chicken. It doesn’t matter whether you are single, a couple or a family the savings are huge, so c’mon guys let’s get butchering our chicken from now on.

Just to remind you, here is the list of what I got from this bird: 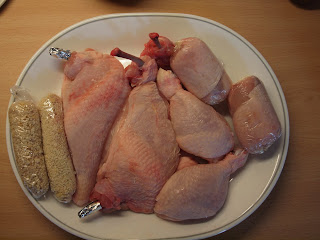