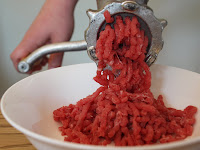 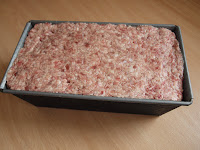 Lorne sausage or the square sausage as it is commonly known, yes, that’s right, you heard me correctly, a square sausage. The origins of this sausage are not clear, some say, it was invented by thrifty farmers in Lancashire(hmmm I thought thrifty farmers were from Yorkshire), well wherever it was invented, for certain it is now claimed as one of Scotland’s finest breakfast sausages. For where ever you are in Scotland you are certain to be given this unique sausage as part of your breakfast (I did not dare describe the breakfast as a “Full English” for the fear of being cut to my jugular by a wee wild red haired visitor dressed in tartan in my sleep!)

You see they don’t like the Sassernach’s having anything they consider to be their invention you know, lol :-)

So back to the Lorne sausage, this has to be one of the simplest forms of charcuterie in our British food heritage (did you notice me being diplomatic there?). Traditionally the sausage was made predominately with beef, however variations with lamb and pork are now available. I prefer a 50 / 50 ratio beef to pork.

Method:
Mince your meats and combine together, then blend in oats and your seasoning and mix thoroughly whilst adding water to reach a sticky consistency. Having done that, place your mixture into a bread tin, cover with cling-film and place in your freezer to part freeze, 1-2 hours should be sufficient. Once the meat has partly frozen, take the meat out of the tin and slice into portions before wrapping in cling-film and once again either replace to the freezer for storage or use within 5-7 days if fresh. 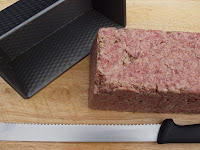 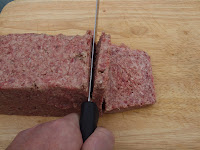 I used to make this in France where I lived and you’ll never believe me! In the same village were some German farmers who kept a fold of pedigree Highland Cattle, how fortunate was I to have this available to me when making this product and if that weren’t jammy enough, I had a further German farmer in the next village, he kept Galloway and Belted Galloway cattle.

I have to say, they was some satisfaction in producing and eating square sausage from Scottish breeds of cattle in France.