You know it is rare to find a real friend, I mean a friend who never judges you, a friend who never asks for anything in return for something, a friend who willingly shares with you what he has. One such friend of mine is Franck Pontais, a super talented Traiteur chef, one who has also risen through the ranks of butchery and charcuterie. 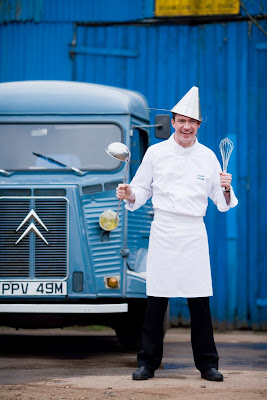 Franck is unusual, no I’ll re-phrase that, Franck is unique, for albeit he is French he has a fantastic sense of humour (come on, keep up with me, the French are not exactly known for their sense of humour, are they?), one to match his talent and if you had to measure his talent by humour then think Peter Kay, Ken Dodd and Tommy Cooper rolled into one. Wow !!

Harrods of London had the benefit of having Franck for 10 years, before his talent was spotted by Selfridges, who then head hunted him. Franck by this time had specialised in the art of making Terrines & Verrines on which he has written a must have book. His talent does not end there, in the culinary world he can hold his own and even surpass any Michelin star chef and this he has proven on many occasion through competition and media.

The ladies adore Franck, he tells me it’s his charm, good looks and French accent, what he neglected to say was; these old age pensioners love his custard tarts, well with their dentures and all you begin to understand why. Lol :-)

On a more serious note, when I’m working in Franck’s adopted county of Suffolk, he always insists I stay with him and his family, he may not know this until now, but he does not need to insist, for the opportunity to play catch up with him and to drink from his wine cellar is more appealing than staying in some strange Hotel.

Now that I’ve embarrassed him with this blog, I’ll finish by saying; check out his website and read for yourself what he is currently working on:

www.franckpontais.co.uk
Posted by Marc Frederic at 11:48