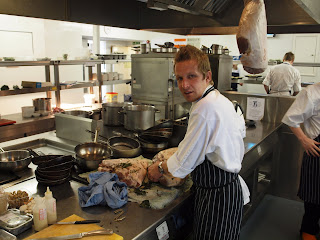 Fantastic news as just reached me, Matthew Downing a super talented young chef I met some months ago on one of my charcuterie courses has just been awarded the professional title of South West Chef of the Year after wowing the judges with his main dish of pan fried veal. Amongst the judges were the Tanner Brothers, Christopher and James from Plymouth and two star Michelin chef Michael Caines MBE of Gidleigh Park. I have had the privilege of mentoring Matthew on charcuterie since our first meeting, but it is his skill as a young chef that as netted him this accolade.

Matthew is a Junior Sous Chef at the www.jackinthegreen.uk.com in the village of Rockbeare near Exeter in Devon.You know skill alone rarely wins awards and Matthew is very lucky in that the team he as around him are very supportive of each other. Recently on a visit to the "Jack" I was welcomed by the Head Chef another Matthew (Matt) who made available to me any part of the kitchen and any member of his brigade to assist with any requests and the same courtesy from the proprietor Paul and all this on a day which happened to be one of their busiest of the year. Wow! (thank you both)

Matthew has created some fantastic dishes recently from what he has learnt about charcuterie including Bresaola (out of this world), also with Coppa ham and Rillette de Porc and much more which I'll cover in future blogs.