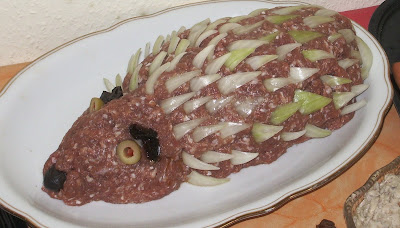 Thuringer mett (pronounced two-ringer met) has been a part of German food heritage for centuries and yet here in UK we would squirm at the thought of having it served at our table. What is it? you might ask, well I can tell you it is raw pork, minced and seasoned like any sausagemeat and served usually with raw onions and used like a pate on bread.

If you have ever visited Germany you will have noticed the strange toilets, the ones with an inspection shelf inside the pot, well this is because the Germans eat a lot of raw meats including pork of which can result in the passing on of worms that the animal may have been carrying.

There are many varieties of raw meat products which the Germans eat and Thuringer mett is just one of them. When this dish is served at a buffet it is usually served in a dish with a garnish of raw onion rings laid on top. Sometimes you will find the dish moulded to resemble an animal and a hedgehog seems to be a popular choice, probaly introduced to encourage the children to eat this dish.